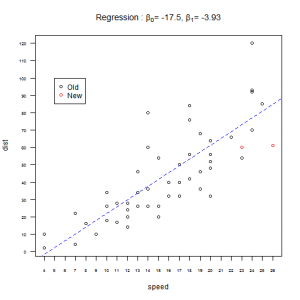 Being able to visualize information through plots is essential for a statistic analysis. A simple and clean graph  can explain much more than words.  In this set of exercises you will test and learn advanced graphic arguments. Before you start check the documentation for the following functions: plot, points, abline, title, legend ,par (including all the arguments), mfrow and layout

For this set of exercises you will use the dataset called cars, an R dataset that contains two variables; distance and speed. To load the dataset run the following code line data(cars).

a)Load the cars dataset and create a scatterplot of the data.

b)Using the argument lab of the function plot create a new scatterplot where the thickmarks of the x and y axis specify every integer.

On the previous plot the numbers associated to the y-axis thickmarks aren’t easy to read. Recreate the plot from the last exercise and use the argument las to change the orientation of the labels from vertical to horizontal.

As you could see the previous plot doesn’t show one of the new observations because is out the x-axis range.

a)Create again the plot for the old observations with an x-axis range that includes all the values from 4 to 26.

Add to the previous plot a legend on the top left corner that shows which color is assigned to old observations and which one to new ones.

This exercise will test your skills to create more than one plot in the same layout. Using the functions par and mfrow.
Create on the same layout two histograms, one for each column of the cars data.

Getting started with Plotly: basic Plots

I'm a Data R-tist (a type of a Data Analyst which in love with R) with a huge passion for classification models, visualization tools and sports analytics. Currently finishing my Masters in Statistics and working as a freelancer.