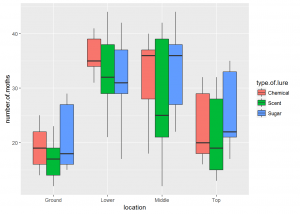 For results of two way ANOVA to be valid there are several assumptions that need to be satisfied. They are listed below.

When the normality and equal variance assumptions are violated you need to transform your data.

In this exercise we will use data on a moth experiment which is available here here. The data is not well formatted in that link so use this csv file moth-trap-experiment.

Solutions to these exercises are found here

Read in the data and inspect its structure

Create boxplots for each category

Check for equality of variance