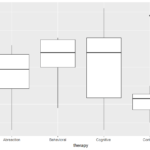 Just like in ANOVA we can have one way or two way MANOVA depending on number of independent variables.

When conducting MANOVA it is important to understand the assumptions that need to be satisfied so that the results are valid. The assumptions are explained below.

In this first part of MANOVA exercises we will use data from a study investigating a control and three therapies aimed at reducing symptoms of koro. Forty patients were selected for inclusion in the study and 10 patients were assigned to each of the four groups. Interest is in understanding which therapy is best in reducing symptoms. We will create three variables that hold change in indices before and after treatment. Here we have one independent variable and three dependent variables resulting in a one way MANOVA.

Solutions to these exercises can be found here

Check the number of observations in each group

Create the variables that hold the change in indices

Get descriptive statistics for each therapy

Check for homogeneity of variance