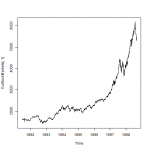 Uncertainty is the biggest enemy of a profitable business. That is especially true of small business who don’t have enough resources to survive an unexpected diminution of revenue or to capitalize on a sudden increase of demand. In this context, it is especially important to be able to predict accurately the change in the markets to be able to make better decision and stay competitive.

This series of posts will teach you how to use data to make sound prediction. In the last set of exercises, we’ve seen how to make predictions on a random walk by isolating the white noise components via differentiation of the term of the time series. But this approach is valid only if the random components of the time series follow a normal distribution of constant mean and variance and if those components are added together in each iteration to create the new observations.

Today, we’ll see some transformations we can apply on the time series make them stationary, especially how to stabilise variance and how to detect and remove seasonality in a time series.

To be able to do theses exercise, you have to have installed the packages forecast and tseries.

Exercise 1
Use the data() function to load the EuStockMarkets dataset from the R library. Then use the diff() function on EuStockMarkets[,1] to isolate the random component and plot them. This differentiation is the most used transformation with time series.

We can see that the mean of the random component of the time series seems to stay constant over time, but the variance seems to get bigger near 1997.
Exercise 2
Apply a the log() function on EuStockMarkets[,1] and repeat the step of exercise 1. The logarithmic transformation is often used to stabilise non constant variance.

Exercise 3
Use the adf.test() function from the tseries package to test if the time series you obtain in the last exercise is stationary. Use a lag of 1.

Exercise 4
Load and plot the co2 dataset from the R library dataset. Use the lowess() function to create a trend line and add it to the plot of the time series.

By looking at the last plot, we can see that the time series oscillate from one side to the other of the trend line with a constant period. That characteristic is called seasonally and is often observed in time series. Just think about temperature, which change predictably from season to season.
Exercise 5
To eliminate the upward trend in the data use the diff() function and save the resulting time series in a variable called diff.co2. Plot the autocorrelation plot of diff.co2.

Exercise 8
Use the diff() function with the appropriate lag to remove the seasonality of the co2 time series, then use it again to remove the trend. Plot the resulting random component and the autocorrelation plot.

Exercise 9
Apply the adf test, the kpss test and the Ljung-Box test on the result of the last exercise to make sure that the random component is stationary.