You are here: Home / Tutorials / How to create your first vector in R 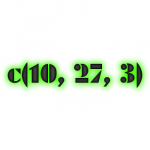 Are you an expert R programmer? If so, this is *not* for you. This is a short tutorial for R novices, explaining vectors, a basic R data structure. Here’s an example:

And here’s another one:

and our final example:

These examples show that a vector is, simply speaking, just a collection of one (fourth example) or more (first and second example) numbers or character strings (third example). In R, a vector is considered a data structure (it’s a very simple data structure, and we’ll cover more complex structures in another tutorial).

So, how can we set up and use a vector in R?

We can construct a vector from a series of individual elements, using the c() function, as follows:

(In examples like these, lines starting with ## show the output from R on the screen).

As you’ll see, once you have entered the vector, R will respond by displaying its elements. In many cases it will be convenient to refer to this vector using a name, instead of having to enter it over and over again. We can accomplish this using the assign() function, which is equivalent to the <- and = operators:

The second statement (using the <- operator) is the most common way of assigning in R, and we’ll therefore use this form rather than the = operator or the assign() function.

Once we have assigned a vector to a name, we can refer to the vector using this name. For example, if we type a, R will now show the elements of vector a.

Instead of a, we could have chosen any other name, e.g.:

Strictly speaking, we call this “name” an object.

To familiarize yourself with the vector data structure, now try to construct a couple of vectors in R and assign them to a named object, as in the example above.

Learn more about vectors in the online course R Programming A-Z™: R For Data Science With Real Exercises! This course had more than 68,000 students enrolled already and does not require prior knowledge of R.

To summarize: A vector is a data structure, which can be constructed using the c() function, and assigned to a named object using the <- operator.

Now, let’s move on to the first set of real exercises on vectors!