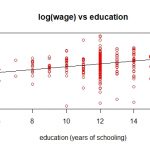 One of the most frequently encountered issues in econometrics is endogeneity.
Consider the simple Ordinary Least Squares (OLS) regression setting in which we model wages as a function of years of schooling (education):

One of the main assumption of OLS is that the independent variables are not correlated with the error term. However, this is seldom the case in most practical applications. The violation of this assumption causes the beta estimates to be biased. In the above example, years of schooling (education) is likely to be correlated with ‘individual ability’ which is part of the error term. Therefore, estimating this model would give a biased estimate of the beta parameter of education as it is considered endogenous. One option is to obtain a measure of ability such as IQ and have it as an independent variable in the model. Availability of such data is not always possible.

Exercise 1
Load the AER package (package description: here). Next, load PSID1976 dataset provided with the AER package. This has data regarding labor force participation of married women.
The data is sourced from: Mroz, T. A. (1987) The sensitivity of an empirical model of married women’s hours of work to economic and statistical assumptions. Econometrica 55, 765–799.

Exercise 2
Get summary statistics for the data and identify possible candidates as instrumental variables for education.

Exercise 3
Regress log(wage) on education. Why do you get an error message? (Hint: focus on the participation variable)

Exercise 4
Regress log(wage) on education and state the estimated return to another year of education for women that participated in the labor force. (Hint: use the subset command)

Note: the following exercises are based on the subsample of 428 working women used on exercise-4.

Exercise 5
Plot log(wage) against education along with the fitted regression line from exercise-4.

Exercise 6
Regress education on feducation (father’s years of education) and comment on the estimated correlation.

Exercise 7
The IV estimate of the return to education can be found using the two-stage least squares (2SLS) procedure.
Regress log(wage) on the fitted values of the model estimated in exercise-6.
The beta parameter for the fitted values is the IV estimate for return to education.
Note that the associated standard errors reported are incorrect as these are not based on the usual OLS formula.

Exercise 8
The ivreg function provides a convenient way to estimate IV models and get correct standard errors.
Using the ivreg function, regress log(wage) on education and specify feducation as the IV.
Do you get the same beta estimates as in exercise-6?

Exercise 9
Get 90% confidence intervals for the return to education from exercises 4 and 8.

Exercise 10
Repeat exercises 6 and 8 using mother’s education (meducation) as the IV and comment on the results.