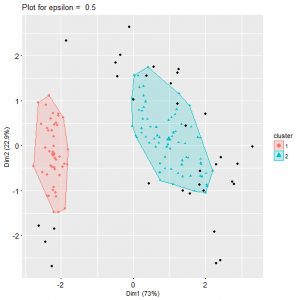 There are different methods of density-based clustering. The most popular are DBSCAN (density-based spatial clustering of applications with noise), which assumes constant density of clusters, OPTICS (ordering points to identify the clustering structure), which allows for varying density, and “mean-shift”.
This set of exercises covers basic techniques for using the DBSCAN method, and allows to compare its result to the results of the k-means clustering algorithm by means of the silhouette analysis.
The set requires the packages dbscan, cluster, and factoextra to be installed. The exercises make use of the iris data set, which is supplied with R, and the wholesale customers data set from the University of California, Irvine (UCI) machine learning repository (download here).
Answers to the exercises are available here.

Exercise 1
Create a new data frame using all but the last variable from the iris data set, which is supplied with R.

Exercise 2
Use the scale function to normalize values of all variables in the new data set (with default settings). Ensure that the resulting object is of class data.frame.

Exercise 3
Plot the distribution of distances between data points and their fifth nearest neighbors using the kNNdistplot function from the dbscan package.
Examine the plot and find a tentative threshold at which distances start increasing quickly. On the same plot, draw a horizontal line at the level of the threshold.

Exercise 4
Use the dbscan function from the package of the same name to find density-based clusters in the data. Set the size of the epsilon neighborhood at the level of the found threshold, and set the number of minimum points in the epsilon region equal to 5.
Assign the value returned by the function to an object, and print that object.

Exercise 5
Plot the clusters with the fviz_cluster function from the factoextra package. Choose the geometry type to draw only points on the graph, and assign the ellipse parameter value such that an outline around points of each cluster is not drawn.
(Note that the fviz_cluster function produces a 2-dimensional plot. If the data set contains two variables those variables are used for plotting, if the number of variables is bigger the first two principal components are drawn.)

Exercise 7
Now look at what happens if you change the epsilon value.

Exercise 8
This exercise shows how the DBSCAN algorithm can be used as a way to detect outliers:

Exercise 9
Compare the results obtained in the previous exercise with the results of the k-means algorithm. First, find clusters using this algorithm: