You are here: Home / Exercises / Exercises (beginner) / Hacking statistics or: How I Learned to Stop Worrying About Calculus and Love Stats Exercises (Part-1) 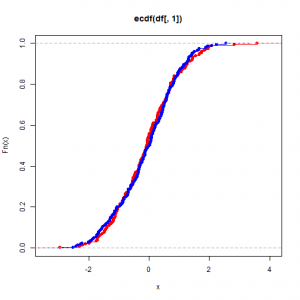 This exercise set will introduce you to common distributions and simple sampling related concepts which will be useful when we’ll see more advance concept like bootstrapping and A/B testing in some future post in this series.

Exercise 1
Use rnorm() to generate 100 points, then plot those points in an histogram.

Exercise 3
We can see that the more points are generated, the more the histogram become symmetric and centered around 0. The reason for this is that rnorm() generate the point based on a function which dictate precisely what should be the proportion of points in each subinterval of [0,1] and that function has for characteristics to be symmetric, centered around 0 with two inflection points which make his shape look like a bell. That density function is called a Normal distribution and a lot of practical application use it.

Use the dnorm() function to plot the density function of a normal distribution of mean 0 and standard deviation of 1 and add it to the last histogram you plot.

The histograms we plotted before where discrete approximation of this continuous function. Since we deal with a random process, each bin of the histogram doesn’t fill up with the correct frequency evenly. As a consequence, it can take a lot of observation before the histogram represent the underling distribution of the random process. Here lies the biggest problem that statisticians face: can we make decisions based on a sample of size n or does a bigger sample would reveal that the random process is distributed under another density function.
Exercise 4
We can use this shape to verify if a random process is a normal process. Another useful plot is the empirical cumulative distribution function (ECDF) which represent visually the probability that an observation is smaller than a certain value. Plot the cumulative histogram of 10000 points from a standard normal distribution, then add the ECDF curve to the plot by using the pnorm() function.

Exercise 5
There’s a lot of distribution other than the standard normal distribution that you can find in practice. To familiarize with the shape of those function, plot the density function of those common functions:

For reference you can visit this page.

Exercise 6
Repeat the steps of exercise 5, but plot the ECDF instead.

Exercise 7
Now it’s time to put what we learn to test! Download this dataset and try to find if those observations have the same distribution. Start by looking at the histogram of both variables in this dataset.

Exercise 8
Both dataset seems symmetric and to have the same domain.

Exercise 9
Use the ecdf() function to plot the empirical cumulative distribution function of both sample.

Use the ks.test() function to run the Kolmogorov-Smirnov test on both samples.

The first sample in the dataset was sampled from a Student distribution with 10 degrees of freedom, while the second was sampled from a standart normal distribution. Both density functions are quite similar and in practice using one over the other won’t make a huge difference, but some function have a heavy tail, meaning that they can create some rare events who take huge value. Those events usually won’t appear in a small sample and failing to differentiate such function for other can generate huge estimation errors. In the next post, we’ll see method to distinguish between two similar distributions.

Hacking statistics or: How I Learned to Stop Worrying About Calculus and Love Stats Exercises (Part-3)