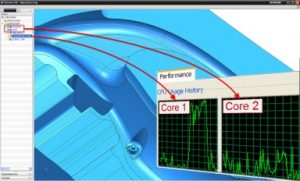 This set of exercises allows to train in using the snowfall package to perform parallel computations. The set is based on the example of parallelizing the k-means algorithm, which splits data into clusters (i.e. splits data points into groups based on their similarity). The standard k-means algorithm is sensitive to the choice of initial points. So it is advisable to run the algorithm multiple times, with different initial points to get the best result. It is assumed that your computer has two or more CPU cores.
The data for the exercises can be downloaded here.
For other parts of the series follow the tag parallel computing.
Answers to the exercises are available here.

Exercise 2
Load the data set, and assign it to the df variable.

Exercise 3
Use the system.time function to measure the time spent on execution of the command fit_30 <- kmeans(df, centers = 3, nstart = 30), which finds three clusters in the data.
Note that this command runs the kmeans function 30 times sequentially with different (randomly chosen) initial points, and then selects the ‘best’ way of clustering (the one that minimizes the squared sum of distances between each data point and its cluster center).

Exercise 4
Now we’ll try to paralellize the runs of kmeans. The first step is to write the code that performs a single run of the kmeans function. The code has to do the following:

Exercise 5
The second step is to wrap the code written in the previous exercise into a function. It should take one argument, which is not used (see explanation on the solutions page), and should return the output of the kmeans function.
Such functions are often labelled as wrapper, but they may have any possible name.

Exercise 6
Let’s prepare for parallel execution of the function:

(Note that kmeans is a function from the base R packages. If your want to run in parallel a function from a downloaded package, you have also to make it available for parallel execution with the sfLibrary function).

Exercise 7
Use the sfLapply function from the snowfall package to run the wrapper function (written in Exercise 5) 30 times in parallel, and store the output of sfLapply in the result variable. Apply also the system.time function to measure the time spent on execution of sfLapply.
Note that sfLapply is a parallel version of lapply function. It takes two main arguments: (1) a vector or a list (in this case it should be a numeric vector of length 30), and (2) the function to be applied to each element of the vector or list.

Exercise 8
Stop the cluster for parallel execution with the sfStop function from the snowfall package.

Exercise 9
Explore the output of sfLapply (the result object):

Getting started with Plotly: basic Plots