You are here: Home / Exercises / Exercises (intermediate) / Hacking statistics or: How I Learned to Stop Worrying About Calculus and Love Stats Exercises (Part-2) 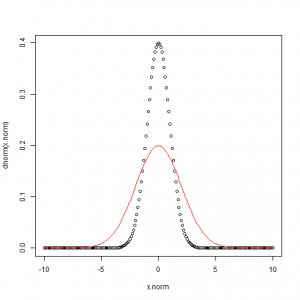 In the last exercise set we’ve seen that random variable can be described by mathematical functions called probability density and that when we know which one describe a particular random process we can use it to compute the probability of realization of a given event. We have also seen how to use an histogram and an ECDF plot to identify which function express the random variable. Today, we will see which mathematical properties of those function we can compute to help us find the probability density who fit a sample. Those properties are called statistics and our job today is to estimate the real value of those properties by using a small sample of data.

Exercise 1
The most commonly used statistics is the mean, which is the center of mass of the distribution, i.e. the point on the x axis where the weighted relative position of each observation sum to zero. For example, draw the density of a standard normal distribution and add to the plot a vertical line to indicate the mean of this distribution. Then, draw another plot, but this time of an exponential distribution with a rate of 1 and his mean.

Exercise 2
In practice, we don’t have access to the probability density function of a random variable and can’t compute directly the mean of the distribution. We must estimate it using a sample of observations of that random variable. Since it’s random, all samples will be different and our estimations of the mean, will all be different.

Exercise 3
From the histogram of the sample mean, we can see that the estimations follow a normal distribution centered around the real value of the mean. We can use this fact to compute the interval which have a certain probability of containing the real value of the mean. This interval is called the confidence interval of the estimate and the probability that this interval contain the real mean of the distribution is called the confidence level. In the next exercise set, we will see methods to compute this interval directly from a sample without knowing the probability density function of the random variable.

Learn more about density functions in the online course Learning Data Mining with R. In this course you will learn how to:

Exercise 4
Load this dataset and use the t.test() function to compute the confidence interval of the mean for both variables with a level of 95%. Does those random variables seems to follow distributions who have the same means?

We see that the confidence intervals doesn’t overlap. This is an indication that the real value of the mean of the first variable is not in the same interval as the distribution mean of the second variable. As a consequence, we can safely suppose than both mean are different and that they don’t have the same probability distribution.

Exercise 5
Another useful statistics is the variance. This statistic is an indication of how the data are spread around the mean. So if two distributions have the same mean, the one with the smallest variance has the most homogeneous value, while the one with the highest variance has more small and high value far from the mean. A related statistics is the standard deviation, which is defined as the square root of the variance.

Exercise 6
In the case of the variance, we cannot directly compute the confidence interval without making assumption on the type of distribution the sample come from or use some fancy method we will introduce in the next exercise set. Luckly for us we can use thevar.test() function to verify if the variances are equal. Use this function on the dataset of exercise 4 three time, once with the alternative parameter set to “two.sided”, then to “less” and finally to “greater”. What is the signification of the three test?

Exercise 7
If the mean is a good representation of the typical value of a random variable defined by a density, this statistics can be skew by outliers. When a sample has outlier a better statistics to use is the median, which is the value that separate the range of observations that can be generated by a random variable in two equal parts.

Generate 200 points from a log-normal distribution with a parameter meanlog = 0 and sdlog = 0.5. Then plot the histogram of those points and represent the mean and the median of this sample by two vertical lines.

Compute the median, the quantile and the 5 and 95% percentile on the variables of the dataset of exercise 4. Then compute the interquartile range which is the difference between the 25% and the 75% quartile. Does those statistics suggest that the two samples have the same distribution?

Load the moment package and use the skewness() function to compute the skewness of three samples you must create:

Hacking statistics or: How I Learned to Stop Worrying About Calculus and Love Stats Exercises (Part-9)

Hacking statistics or: How I Learned to Stop Worrying About Calculus and Love Stats Exercises (Part-1)