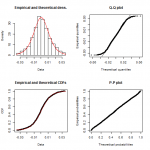 On this set of exercises, we are going to use the lm and glm functions to perform several generalized linear models on one dataset.

Since this is a basic set of exercises we will take a closer look at the arguments of these functions and how to take advantage of the output of each function so we can find a model that fits our data.

Before starting this set of exercises, I strongly suggest you look at the R Documentation of lm and glm.

Note: This set of exercises assume that you have a basic understanding of generalized linear models.

The dataset we will be using contains information from passengers of the Titanic including if they survived or not.

To obtain the data run these lines of code.

1. Use DATA to create a linear model using the function lm with the variables Age and Fare as independent variables and Survived as the independent one. Save the regression in an object called lm_reg

2. Use the function glm to perform the same task and save the regression in an object called glm_reg

If you print any of the previous objects you will realize that there’s not much information about the performance of the models, fortunately summary is a great function to find out more about any statistical model you preform to a dataset. Depending on the model summary will produce different outputs.

So far we have been assuming (incorrectly) that the dependent variable (Survived) follows a normal distribution and that’s why we have been performing a linear regression. Obviously Survived follows a binomial distribution, there are only two options either the passenger survived (1) or the passenger wasn’t that lucky and he died (0). Since the data has a binomial distribution we should perform a logistic regression, to do this use the function glm to perform a logistic regression using Age and Fare as independent variables and save it in an object called bin_model. Hint: Define the value of the argument family properly.

Inside the family attribute you can always specify a particular link, in case you don’t a default link will be associated depending on the family you chose.

Findind the right model requires to compare different models and choose the best, although there are many performance measures, for now we will use the AIC as our measure (smaller AIC are better). This means that bin_model is better than bin_probit_model, so let’s keep working with bin_model.

Until now intercept variable has been part of the models. Create a logistic regression with the same variables but with no intercept.

Impute data. If you run the summary function to any of the previous models you will find out that 177 observations have been deleted due to missingness. This happens because the glm function has as default argument na.acton ="na.omit". This make easier to run a model with messier data, but that is not always great. You want to have full control an understanding of what does the function is doing.

1. There are some missing values in age, replace this values with the median.
2. Update the glm_model with the updated data, specify na.action='na.fail' This will assure us that the dataset has no missing values, otherwise it will show an error.

Add a quadratic interaction for the variable Fare into the current model, specified in glm_model

Add categorical variables.  Add Sex as an independent variable  into the current model specified in glm_model. Note that Sex is not a numeric variable.

Now that we have found a good model that fits our data, so it’s time to use the predict function to find how good the model predicts in our own data. Use the function predict to find the prediction of the model in DATA and save it in Pred.default

Pred.default shows the predicted values under the link transformation, in this case logit. This is not easily interpretable, to fix this problem we can specify the type of prediction we want.

Obtain the predictions as probability values.

Exta: What’s the percentage accuracy of this model if we assigned as died (0) if the predicted probability is less than 0.5 and survived (1) otherwise?

I'm a Data R-tist (a type of a Data Analyst which in love with R) with a huge passion for classification models, visualization tools and sports analytics. Currently finishing my Masters in Statistics and working as a freelancer.