You are here: Home / Exercises / Exercises (intermediate) / Hacking statistics or: How I Learned to Stop Worrying About Calculus and Love Stats Exercises (Part-9) 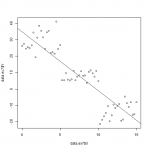 In this series of article I have tried to help you create an intuition on how probabilities work. To do so, we have been using simulations to see how concrete random situation can unfold and learn simple statistics and probabilistic concepts. In today’s set, I would like to show you some deceptively difficult situations that will challenge the way you understand probability and statistics. By doing so, you will practice the simulation technique we have seen in past set, refined your intuition and, hopefully help you avoid some pitfall when you do your own statistical analysis.

Exercise 1
Suppose that there are exactly 365 days in a year and that the distribution of birthday in the population is uniform, meaning that the proportion of birth on any given day is the same throughout the year. In a group of 25 people, what is the probability that at least two individuals share the same birthday? Use a simulation to answer that question, then repeat this process for group of 0,10,20,…,90 and 100 people and plot the results.

Of course, when the group size is of 366 we know that the probability that two people share the same birthday is equal to 1, since there are more people than day in the year and for a group of zero person this probability is equal to 0. What is counterintuitive here is the rate at which the probability of observing this grow. From the graph we can see that with just about 23 people we have a probability of about 50% of observing two people having the same birthday and that a group of about 70 people will have almost 100% chance to see this happening.

Exercise 2
Here’s a problem that can someday save your life. Imagine you are a war prisoner in an Asian Communist country and your jailer is getting bored. So to past the time, they set up a Russian roulette game where you and another inmate play against one another. A jailer takes a six-shooter revolver, put two bullets in two consecutive chamber, spin the chamber and give the gun to your opponent, who place the gun to his temple and pull the trigger. Luckily for him, the chamber was empty and the gun is passed to you. Now you have a choice to make: you can let the chamber as it is and play or you can spin the chamber before playing. Use 10000 simulations of both choices to find which choice give you the highest probability to survive.

The key details in this problem is that the bullet are in consecutive chamber. This mean that if your opponent pulls the trigger on an empty chamber, and that you don’t spin the chamber, it’s impossible that you pull the trigger on the second bullet. You can only have an empty chamber of pull the trigger on the first bullet, which means that you have 25% chance of dying vs 2/6=33% chance of dying if you spin the chamber.
Exercise 3
What is the probability that a mother, whose is pregnant with nonidentical twin, give birth to two boys, if we know that one of the unborn child is a boy, but we cannot identifie which one is the boy?

Exercise 4
Two friends play head or tail to pass the time. To make this game more fun they decide to gamble pennies, so for each coin flip one friend call head or tail and if he calls right, he gets a penny and lose one otherwise. Let’s say that they have 40 and 30 pennies respectively and that they will play until someone has all the pennies.

When the number of coin flip get high enough, the probability of someone winning often enough to get all the pennies rise to 100%. Maybe they will have to play 24h a day for weeks, but someday, someone will lose often enough to be penniless. In this context, the player who started with the most money have a huge advantage since they can survive a much longer losing streak than their opponent.

In fact, in this context where the probability of winning a single game is equal for each opponent the probability of winning all the money is equal to the proportion of the money they start with. That’s in part why the casino always win since they got more money than each gambler that plays against them, as long they get them to play long enough they will win. The fact that they propose game where they have greater chance to win help them quite a bit too.
Exercise 5
A classic counter intuitive is the Monty Hall problem. Here’s the scenario, if you never heard of it: you are on a game show where you can choose one of three doors and if a prize is hidden behind this door, you win this prize. Here’s the twist: after you choose a door, the game show host open one of the two other doors to show that there’s no prize behind it. At this point, you can choose to look behind the door you choose in the first place to see if there’s a prize or you can choose to switch door and look behind the door you left out.

When you pick the first door, you have 1/3 chance to have the right door. When the show host open one of the door you didn’t pick he gives you a huge amount of information on where the price is because he opened a door with no prize behind it. So the second door has more chance to hide the prize than the door you took in the first place. Our simulation tell us that this probability is about 1/2. So, you should always switch door since this gives you a higher probability of winning the prize.

To better understand this, imagine that the Grand Canyon is filled with small capsule with a volume of a cube centimeter. Of all those capsules only one has a piece of paper and if you pick this capsule, you win a 50% discount on a tie. You choose a capsule at random and then all the other trillion capsules are discarded except one, such than the winning capsule is still in play. Assuming you really want this discount, which capsule would you choose?

Exercise 6
This problem is a real life example of a statistical pitfall that can easily be encountered in real life and has been published by Steven A. Julious and Mark A. Mullee. In this dataset, we can see if a a medical treatment for kidney stone has been effective. There are two treatments that can be used: treatment A which include all open surgical procedure and treatment B which include small puncture surgery and the kidney stone are classified in two categories depending on his size, small or large stones.

This is an example of the Simpson paradox, which is a situation where an effect appears to be present for the set of all observations, but disappears when the observations are categorized and the analysis is done on each group. It is important to test for this phenomenon since in practice most observations can be classified in sub classes and, as the last example showed, this can change drastically the result of your analysis.

We can see that the general trend of the data is different from the trends of each of the categories. In other words, the Simpson paradox can also be observed in a regression context. The moral of the story is: make sure that all the variables are included in your analysis or you gonna have a bad time!

Exercise 8
For this problem you must know what’s a true positive, false positive, true negative and false negative in a classification problem. You can look at this page for a quick review of those concepts.

A big data algorithm has been developed to detect potential terrorist by looking at their behavior on the internet, their consummation habit and their traveling. To develop this classification algorithm, the computer scientist used data from a population where there’s a lot of known terrorist since they needed data about the habits of real terrorist to validate their work. In this dataset, you will find observations from this high risk population and observations taken from a low risk population.

As you can see, the variance of the estimation of the mean is inversely proportional to the sample size, but this is not a linear relationship. A small sample can create an estimation that is a lot farther to the real value than a sample with more observations. Let’s see why this information is relevant to this set.
Exercise 10
A private school advertise that their small size help their student achieve better grade. In their advertisement, they claim that last year’s students have had an average 5 points higher than the average at the standardize state’s test and since no large school has such a high average, that’s proof that small school help student achieve better results.

Suppose that there is 200000 students in the state, their results at the state test was distributed normally with a mean of 76% and a standard deviation of 15, the school had 100 students and that an average school count 750 student. Does the school claim can be explained statistically?

A school can be seen as a sample of the population of student. A large school, like a large sample, has a lot more chance to be representative of the student’s population and their average score will often be near the population average, while small school can show average a lot more extreme just because they have a smaller body of student. I’m not saying that no school are better than other, but we must look at a lot of results to be sure we are not only in presence of a statistical abnormality.