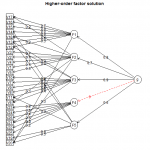 In this introduction to factors series, we will approach factors in a somewhat uncommon way.

Answers to the exercises are available here. For other parts in this series, follow the tag factors like a pro.

Let’s begin a deep dive into factor variable in R.

Before starting, it might be helpful to learn about what attributes() are in R. Attributes are used to store metadata about the data object (e.g. plain old R objects) in R. Any R object can contain attributes. In fact, you probably have used and relied on attributes to perform your R functions. Consider the following R code:

The code above returns the rownames of the mtcars dataset. Simply enough, right? But have you ever wondered how this is different from, say, a matrix of the same size and data values? It’s in the attributes (and this is how many R objects are constructed)

Exercise 1
First see what R console returns as the result of mtcars, and then see what the result is when you run attributes() on mtcars

Exercise 2
You may wonder “Okay, so there are some info about mtcars. So what?” Well these attributes come in quite handy in understanding how factor variables behave.

Learn more about different data types and how they are used in everyday data science workflows in the online course Getting Started with R for Data Science. In this course, you will learn how to:

Exercise 5
Interesting. So what if we try to change the second value of factor_character_var from “B” to “b” by simply assigning to it?

Exercise 6
See how the levels stayed the same but the value themselves became NA? This is because levels attribute contains info about all the possible values the factor variable can be. Because you attempted to change the second value “B” to “b” and “b” doesn’t exist, you are getting an invalid factor level error.

Fix the problem from Exercise 6 by using technique you learned in Excercise 4. Make sure both the levels and the value for second index become “b”.

Exercise 7
We’ve so far covered what happens if you change levels and values of factor variable that only appears once in the vector (“A” and “B”). What if we change “C” level to “c”? Use the appropriate method to change the level of “C” to “c”.

Modify the level “c” to “c_via_attribute” by assigning the new level to the attribute of the factor_character_var variable. Just to repeat, this is NOT the correct way to modify levels for a factor variable in R. We are doing this exercise for sake of completeness and to learn about how attribute value assignment work!

Exercise 9
In most statistical modeling cases, your variable maybe “coded” as simple characters to stand for something much more informative. For example, a patient’s sex may be coded as “M” or “F”, but they mean “Male” or “Female”. This is much more common scenario than the exercises above.

Create a factor variable sex with c("M", "M", "F") as it’s values. Change the levels of sex to “Male” and “Female” for “M” and “F” respectively. You should first try the method learned above. Also attempt to use factor function to do all this in one step. Consult the factor() documentation for help.

Exercise 10
You see some interesting results about the levels of sex variable c("M", "M", "F"). The order of the levels start to matter. Why is this? By default, R factor levels are computed alphabetically. Whenever you modify levels or assign labels to factor either via levels() or by factor(..., levels = ..., labels = ...), you have to take note of the default ordering of R factor levels (alphabetical). As you saw in previous exercises, changing the levels values changes the values themselves. If your new levels & labels are in a different order, then the underlying values themselves will change. The future articles will discuss how the order of factor levels matter. For the last exercise, use factor() to explicitly define the levels to be “Male” and “Female” in this order.