You are here: Home / Archives for igraph visualizations 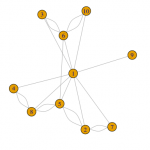 Following on from last time, this tutorial will focus on more advanced graph techniques and existing algorithms such as Dijkstra’s algorithm that can be used to draw real meaning from graphs. This is part 2 in the series of iGraph tutorials, for part 1, click here. When completing these tutorials be sure to read up […]

This is part 1 of a series in analyzing and visualizing network data using iGraph. The rest of the series can be found here. Graph Theory, or network analysis as it is often called, is the mathematical portrayal of a series of edges and vertices. To contextually picture a network, think of each node being […]